Swedish Pontus Eriksson thrives in his small but extremely strong and tailor-made big city machine - the chalk-white Hydrema has, among other things, been given a special truck seat, a dressed cab and a built-in "vacuum cleaner".

The Swedish magazine “Entreprenad” visited the enthusiastic operator last year (you can read the article here: https://www.entreprenad.com/article/view/680919/motsatsernas_maskin  ). And now the cool-looking machine is part of the magazine’s 5 finalists to become Sweden's most beautiful construction machine -  Sveriges snyggaste entreprenadmaskin. – you see the finalist and vote here:  https://www.entreprenad.com/aretsmaskin/page.xhtml?arrangeSubpage=1372.

"This machine has a higher digging capacity, but it is significantly smaller in size," says Pontus Eriksson.

A color that sticks out

A chalk-white wheeled excavator of just under 20 tonnes shines in the sun on a clear and cold October Friday. The machine, a Hydrema MX16 that was delivered to Swedish construction company Bäckströms in July 2019, is working on a district heating project in Årsta, near Stockholm.

In large parts it is a standard machine, but it can be seen in the distance that Bäckströms has had it specially adapted and it is the operator Pontus Eriksson who has had to decide. - It is, for example, fully painted - it is not just "the yellow" that has changed color, he says.

He attaches great importance to the choice of color - this is not least noticeable on the machine he previously operated. - It's a bit of my thing - I like to have equipment that stands out. I had the first custom coloured machine in 2014. 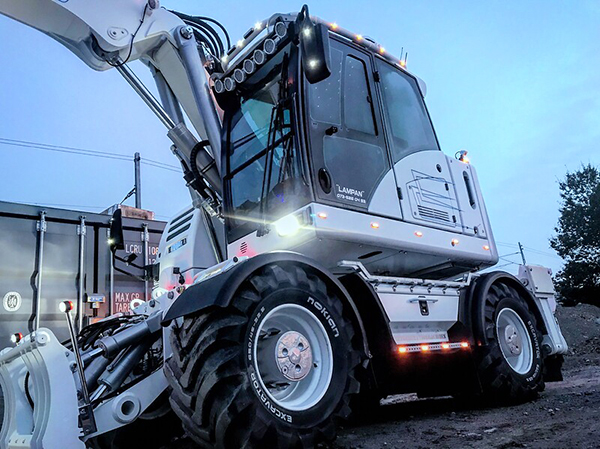 Some may think that he spends time and money on a seemingly superficial thing, but Pontus Eriksson sees several advantages in deviating from the standard look. - The machine is kept better and there is a high advertising value - the company is visible everywhere and you win a lot on the marketing-side. That the operator wants to sit in a nice machine is one thing. Convincing managers that it's a good idea is another. - I have actually had the opportunity to present my crazy ideas to Bäckströms management; they took a chance when I wanted to redo the first machine many years ago, but they quickly saw that it paid off because now we can be seen everywhere.

He chose to paint the machine this time, partly because it is not possible to foil all parts. - If you have access to everything, such as excavators and engine space, it will be too fussy - then you have to paint, even if there are less colors to choose from in that case. He chose to also paint the undercarriage and tiltrotator in Traffic White, hydraulic pistons and wheel axles have been given a gray metallic color. The machine has afterwards been given decals in gray and blue. - White is a neutral color, you have to think a little about the machine being able to be resold, comments Pontus Eriksson.

The MX16 excavator is Bäckström's first Hydrema machine and the idea was actually to get another excavator brand when the old backhoe loader was to be replaced. - I checked a bit on the market but then I thought that I like what is odd - it was a bit odd to use the backhoe loader instead of an excavator and Hydrema is also a bit odd, it mostly works on the rail tracks. He tested the Hydrema excavator for a week and he was done for. The machine has a lot of peculiarities that I like, says Pontus Eriksson and highlights, for example, the large cab and the automatic hydrostatic gearbox. 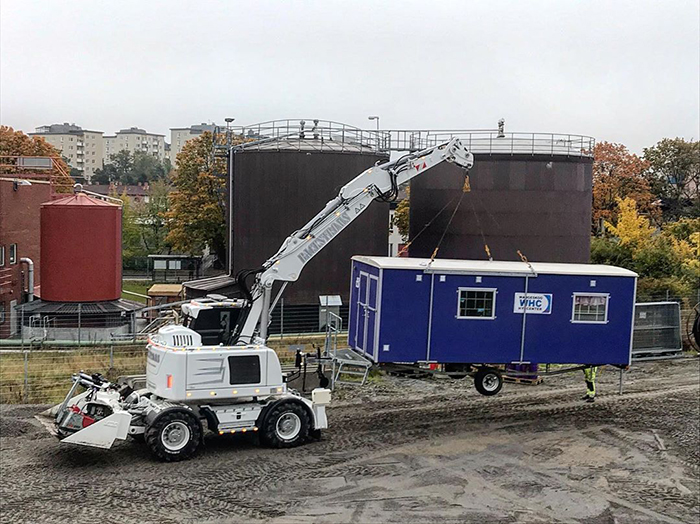 It may not be that hard to push high and low gears, but when you suddenly avoid it, it is very useful. He considers the Hydrema to have some seemingly contradictory features: It has extremely large digging and lifting capacity, far above the competition, but is at the same time the most compact in its class. Large cab and ample digging capacity in a small and agile machine is perfect when working in the city, he believes. The rear of the machine is very short, which is good in the city, where space is often tight and we rarely have the space we need - therefore we need to reduce the size without compromising capacity. 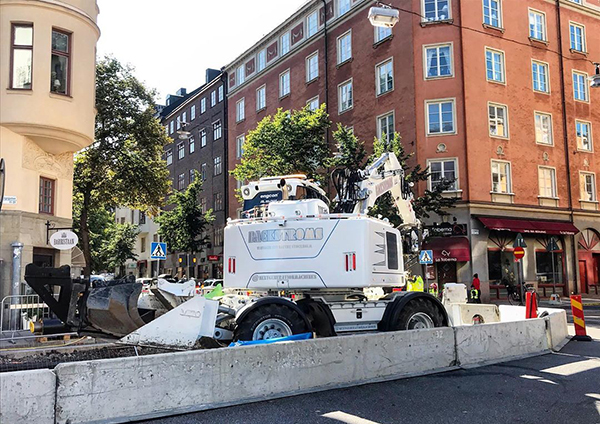 Pontus Eriksson and Bäckströms were not content with only ordering the special paint. This is the first machine that Hydrema has delivered with Nokian Twin tires - I think they are the best tires. 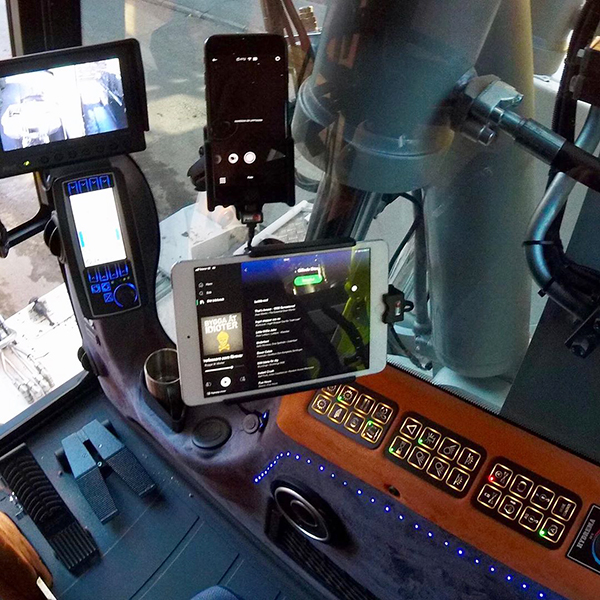 He has also replaced the driver’s seat. There were a number of options of seats, but I, who was used to a very different seat in my previous machine, and wanted my own variant. He needed a long and narrow seat, with a little different upholstery. Sitting comfortably is important, the cab should also be reasonably good-looking and here Hydreman failed in its original condition, states Pontus Eriksson and looks slightly appalled. All interior plastic details were sand beige coloured - it was a bit dirty, like a 1980s Skoda.

Now I have covered all the plastic with foil fabric, it may not be easier to wash but the dust is not visible in any case! He has also installed a dashcam (a camera on the dashboard) and a go-pro camera. It's good - now I can "prove" what happened if problems occurs. In the cab roof, small recessed lamps are scattered. A starry sky to raise the coziness factor perhaps? - Yep, laughs Pontus Eriksson.

The machine has also been given air-powered powerful horns in the form of truck nozzles that are driven via an air tank and a compressor under the cab floor. I have additional benefit from this equipment, as I have inserted a nozzle that takes air from the compressor, which I use it to blow out debris from the cab, Pontus Eriksson explains. 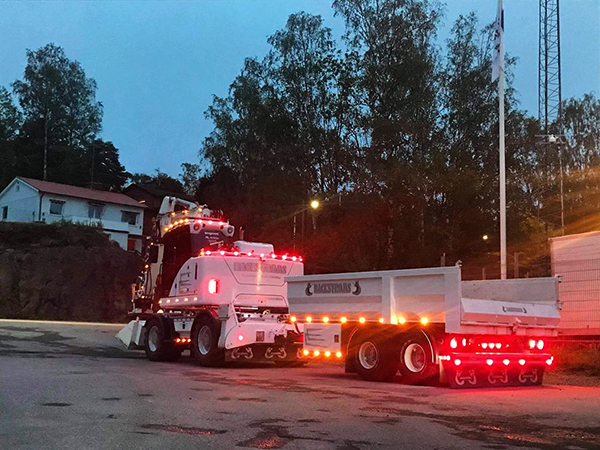 Behind the machine is a similarly chalk-white Palmse ten-ton trailer with lacquered rims and storage boxes with a hatch in high-gloss polished stainless steel. Now I can bring everything I need, such as degreasers and sponges, says Pontus Eriksson. Extra lighting has also been fitted to the rear of the trailer. On trucks, the function is clear, here it is perhaps mostly for the sake of appearance, Pontus Eriksson admits with a smile.

He got the machine as he wants it in terms of appearance and capacity. However, he needed one more thing to thrive one hundred percent.

I may have acquired a slightly too serious sound system, he says. The car audio industry has had to deliver customized details to create the best possible sound, and the base certainly beats well when he starts the app-controlled system. Some people think that this kind of thing is completely unnecessary, that it serves no purpose. Then I pull on that old cliché that is actually not a cliché - this is my office, here it should be clean and fresh and you should want to sit here for eight hours. Then I want to be able to listen to music too!