The MX14 is a premium Danish product manufactured by Hydrema. Little known in France, this brand is worth exploring. The french magazine Technique TP has tested an MX14 wheeled excavator. Read the full evaluation below.

Hydrema excavators are like Danes on holiday. They are real eyecatchers. Well finished, well thought out in appearance, they clearly play the premium card. Indeed, they have a high standard of equipment and propose gimmicks worthy of the most upscale versions of its competitors. We were able to take control of the MX14, the lightest of 3 compact machines offered by the brand. An encounter full of pleasant discoveries. 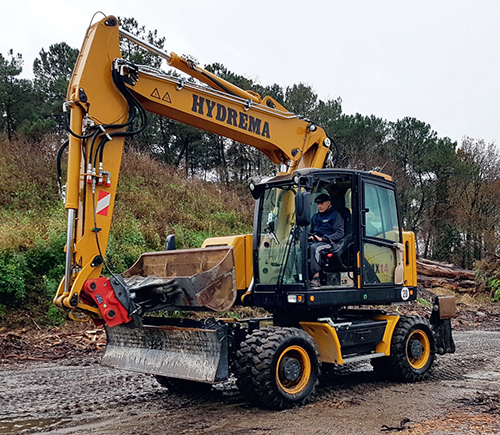 In road mode with the Power mode engaged, the MX 14 transforms into a fighter jet. The dynamic ride control is particularly efficient.

I often wonder why some machines are not better presented over here. Especially when they have convincing assets in the shape of a Hydrema. Indeed, even if there is no lack
of “good” machines in the 15/18 ton niche, with some well placed stallions in the sector, the MX series have nice arguments to make and they deserve, no offense to the competition, their place in our cities. My little finger tells me that the planets are beginning to line up so that my impression can become reality. Do not get me wrong: you will not find a Hydrema on every street corner .... on the one hand because the major stakeholders who monopolise this segment of the market will stay in place, then because the manufacturer's production capacities are limited to a few hundred machines, finally because the positioning of price/technical characteristics reserves them for a certain clientele. But still ... between the wheeled excavators, backhoe loaders and dump trucks ... this Dane could well garner some attention ... and not only on the beaches of the South of France in summer. 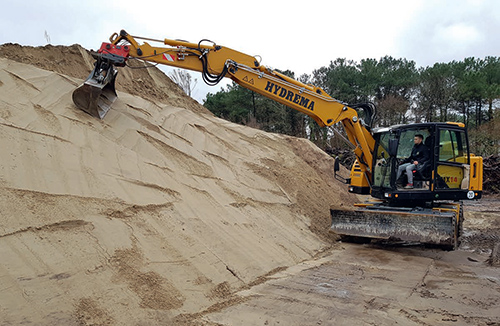 The movement of equipment is excellent. The variable excavator arm length (tripple artciulated Boom) is standard, and the MX14 can be mounted with 3 dipper lengths.

THE MX 14 IS THE SMALL COMPACT of range that comprises 3 tonnages: 16.9 t (MX14), 18.2 t (MX16) and 19.6 tons (MX18) in blade and stabilizer version. Do not ask me why it is called MX14... I would not be able to give you a plausible answer, knowing that even the lightest version (blade only) already weighs 15.7 t. In fact, I have given up understanding incomprehensible logic, and then anyway, with a few rare exceptions, all brands have their own history and notorious inconsistencies. Just remember that to
move from the MX14 to the MX 16 or the MX 18, one needs to modulate between 2 boom lengths, 2 chassis and 3 counterweights, the components and cabin remaining unchanged. The MX 14 mainly distinguishes itself from its big sister by its counterweight and rear overhang and can choose between 3 dipper lengths (2 m, 2.5 m and 3 m). The version tested (2.5 m), can boast to have one of the smallest rear swing radiuses of this market segment (1 550 mm), combined with foldable equipment that verges on the exceptional. FYI, the front swing radius is 1,990 mm and drops to 1,650 mm in the 2 m version. The chassis is rather "classic", with four-wheel drive including two steering wheels, a blade and stabilizers. The tested model had twin wheels that improve its stability. 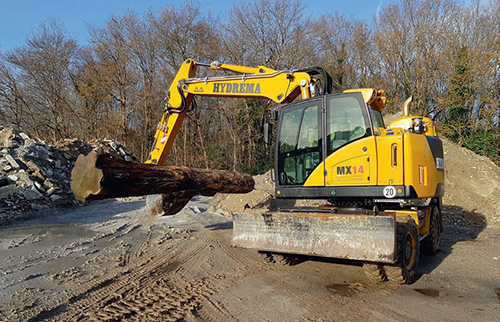 The Hydrema has good overall stability and its lifting capacities are quite decent, with 1.5 t at a reach of 6 m range and 1 m from the ground, without supports.

FOR THE OVERALL DESIGN OF THE MACHINE, the Danes have selected premium components. So there are few options available, because the MX 14 comes with a variable jib length, a deluxe cab, a powerful 165 hp Cummins engine, 4-cylinder 4.5-litre Stage 4, Rexroth hydraulics, ZF axles and 2-speed Powershift transmission. In short, all known and proven components, able to meet the needs of demanding work in harsh and trying weather conditions for the equipment such as those in Nordic countries in particular.

THE upper carriage IS OVERALL WELL DESIGNED. Though access to the cabin is not very practical, the upper carriage is very compact, it emphasises the roomy cabin while maintaining good accessibility to all the engine and cooling components with reversible fan (located on the right side) or the electric systems, located behind the cabin, thanks to large covers, especially that of the engine which opens electrically. The access to the pumps or the diesel and AdBlue tanks is done by means of an ingenious sliding ladder, integrated under the superstructure. All elements for the exhaust gas treatment are located on top of the upper carriage, and if they appear somewhat unsightly, they provide excellent access capability if they require intervention. Always practical, operators (maniacs) will appreciate the storage boxes situated in the chassis, to store slings and shackles, accessories and other essential tools. 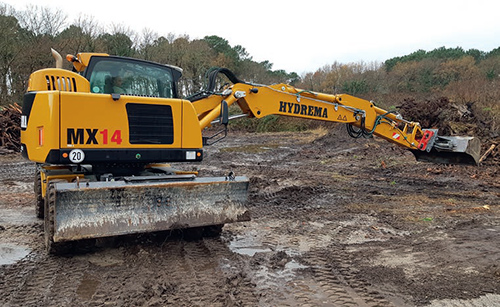 FLEXIBLE AND PRODUCTIVE
Its qualities at work (productivity/performance) are undeniable thanks to its powerful engine that gives it particularly important hydraulic resources. Its closed-centre circuit with a large pump dedicated to the equipment and a flowrate of 319 l/min gives it the advantage of a combination of hard to fault functions. If it shows little aptitude in loader mode, its bucket cylinder breakout force
(106 kN) and dipper breakout force (93 kN) are remarkable. and the MX 14 can almost boast of being one of the most powerful machines in this market segment. Its lifting forces are also quite decent, with 3.4 t at a reach of 6 m and 1 m height with lowered supports (1.5 t without the supports) and 5.6 t along the axis of the machine. Because of the design of its excavator arm and its positioning well to the back on the upper carriage, it has excellent movement that makes it ever so comfortable to perform various jobs, both in infrastructure works as in earthworks. With the blade and stabilizers lifted, the stability of the machine is suitable, helped by the automatic locking of the axle and the brake, which add additional stability. This excavator is, in terms of handling, very flexible, precise, and “normally” fast. It is equipped with joysticks with proportional controls, whose direction on the left one, in tandem allowing for a travelling speed of up to 10 km/h.The MX14 has two engine speed ranges. The Power mode allows you to benefit of a maximum of power, the Eco mode lowers the engine speed to 1 600 rpm (compared to 2000 rpm) and provides a very significant reduction in consumption. 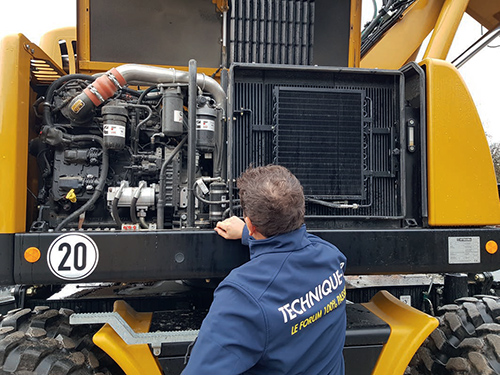 Access to the engine and cooling pack is good, the large cover has an electric opening.

A FIGHTER JET
On the road is where the MX14 is really amazing. When the "road" mode is engaged, the equipment is locked, the dynamic ride control (particularly effective) and the cruise control are engaged. And by putting the engine in "Max" mode, it becomes a really fast machine, with surprising speed and strength and can reach up to 38 km/h. The forward/reverse shuttle is operated by means of a pedal (right foot of the operator) while a pedal on the left controls the variable jib length. The blade and stabilisers are also controlled by foot. If this configuration shows a certain originality, the fact remains that more "standard" and conventional controls as those that we currently use, such as the shuttle and the blade control on the right manipulator would be a " plus". When it comes to comfort, the MX14 has one of the largest cabins on the market, developed internally by Hydrema. The upper part of the front window has a large parallel wiper, effective but it does not completely clean the bottom part. It comes standard with a comfortable seat, a particularly efficient air conditioning/heating and, what a luxury, a cooler that can even act as a heater. The driver has good visibility on the equipment and work area, right for his work environment, aided by the side and rear cameras

The MX14 is a good machine in the class of 15/17 ton wheeled excavators that can rub shoulders with a few historical machines in this market segment. The levels of finish, design and renowned components give this machine very good assets.