This story is not about any man and his ordinary backhoe loader, it is the story of Georg Angerer, who still today, at the age of 68, has not lost his passion for his two Hydrema backhoe loaders.

Already in 1974, he entered the construction business when he bacame an agricultural machinery mechanic. His first job for a small contractor in the Kaufbeuren area in Germany was operating a construction crane and driving multi-purpose machines of the Massey-Ferguson brand. In 1989 this company purchased a Hydrema backhoe loader -  model 806 - which already at that time was the only manufacturer of a hydraulic side shifting system of the excavator arm. The passion for this machine arose very quickly, because Georg Angerer was the only man who could operate this machine effectively. A larger company acquired the small company in 1991, and in 1997, Georg Angerer aquired his first Hydrema by buying this 806 and hereby becoming self-employed.

Even today he owns this Hydrema 806 backhoe loader, which meanwhile has done about 50,000 operating hours, and with the second engine still running after almost 30 years, like a clockwork. However, Georg Angerer did not want to be dependent on a single machine. Therefore, in 1999, two years after taking the step into self-employment, he bought a second Hydrema backhoe loader. Of course, this 906B is also equipped with a telescopic boom, "because everything else is out of the question for me," says Angerer. The extended range greatly supports the efficiency of the machine. "After all, I can still lift about a ton on the extended excavator arm," says Angerer proudly. If you look out at the construction site in Kaufbeuren, where building contractor Cornelius Baur, is constructing a beautiful 700 square meter house on a 3500 square meter site, then you will experience a backhoe loader in perfection. No trace of Angerer being nearly 70 years old, or the 906B of Hydrema already having run for more than 30,000 hrs. with the same engine in use. Almost only in idle, Angerer does all the necessary work with the machine, unless there is a need for maximum power. Then the 20-year-old machine pushes, even today with brute force and no slip, seemingly effortless, since the sound in the engine block only slightly raises. Cornelius Baur is also enthusiastic: "I do not know what I would do without Mr. Angerer. At 3,500 square meters, there is a lot of soil that needs to be moved. However, George Angerer and his machine pull through and do what needs to be done during the day, even if it takes longer. " 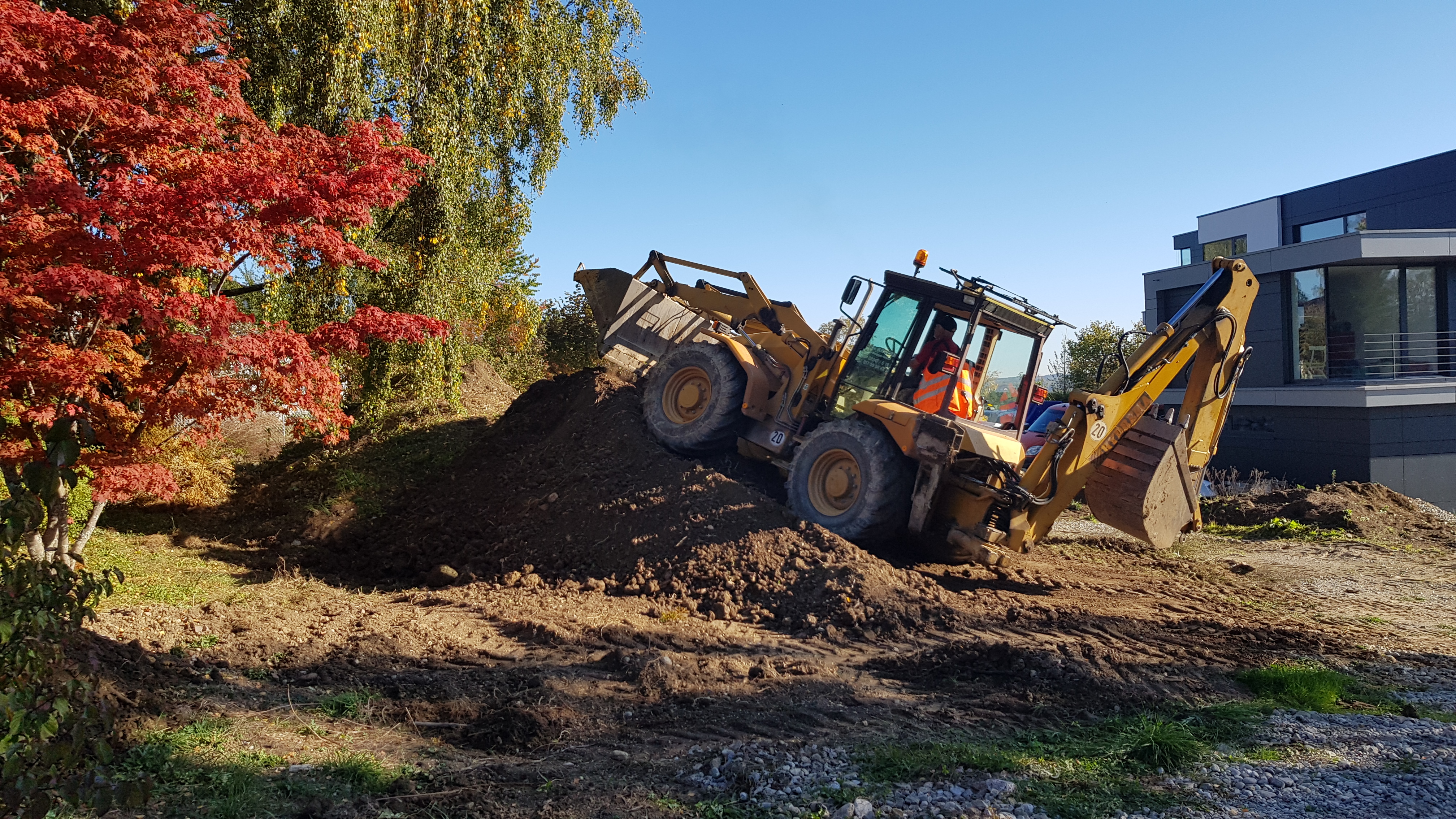 In fact, Mr. Angerer really does everything from normal earthmoving to excavation, sewage, cable works and putting septic tanks in the ground to a depth of almost 8 meters. He has even raised roof trusses on a small barn with his Hydrema. Thanks to the enormous power of the machine, he has already dug out a cellar. First, he pushed everything away using the front loader, and then he comes from the side and works with the telescopic excavator arm to finish the job. Thanks to the Hydrema multifunctional machine and the quick coupler, you can easily convert the machine to the work that is expected by it. "And the best thing is that the shovels of the two machines fit together. Hydrema has always made strong and versatile machines that at the same time are reliable throughout their lifetime. After all, there are 10 years between the two machines, "says Angerer. 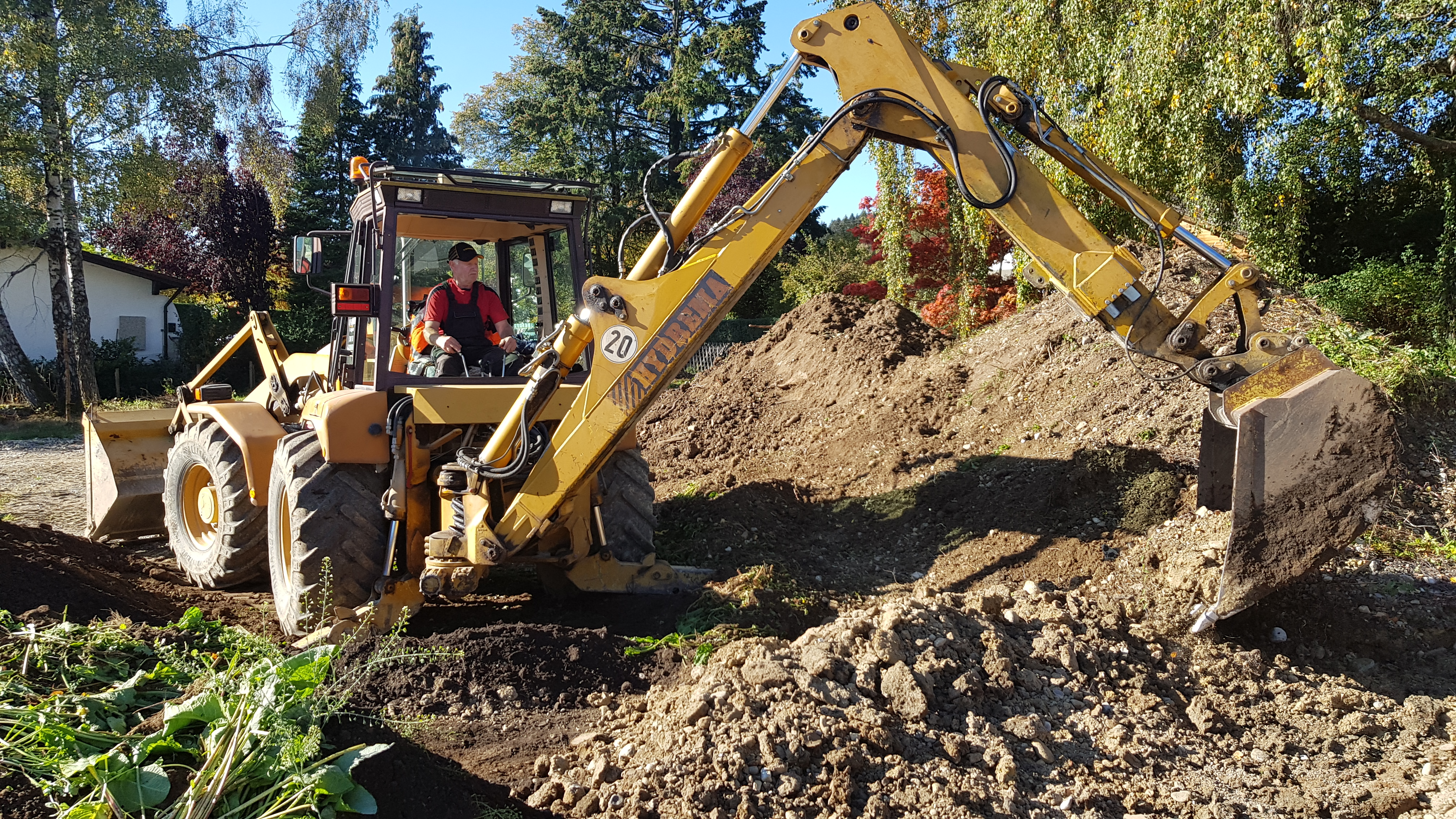 The great advantages offered by the Hydrema can’t be described in one sentence for Georg Angerer. "Where should I start; first of all, the machine really do drive very quickly from one construction site to another. Moreover, you always have all the machines with you, because I do not drive only with an excavator, or only with a wheel loader, but I drive with several machines at the same time. Additionally, the power of this compact machine is truly extraordinary, just as the design of the machine is exceptionally solid. I can slew the excavator arm 280 degrees, but by slweing the excavator arm with cylinders, I have a tremendous swing moment. Finally, it is just a very pleasant job. The fact that the machine always behaves very calmly and confidently, that the engine always provides the needed power and that you can sit comfortably in the cab, makes it fun to work with the machine. In principle, I do not need to work anymore at my age, but it still makes me happy today. " 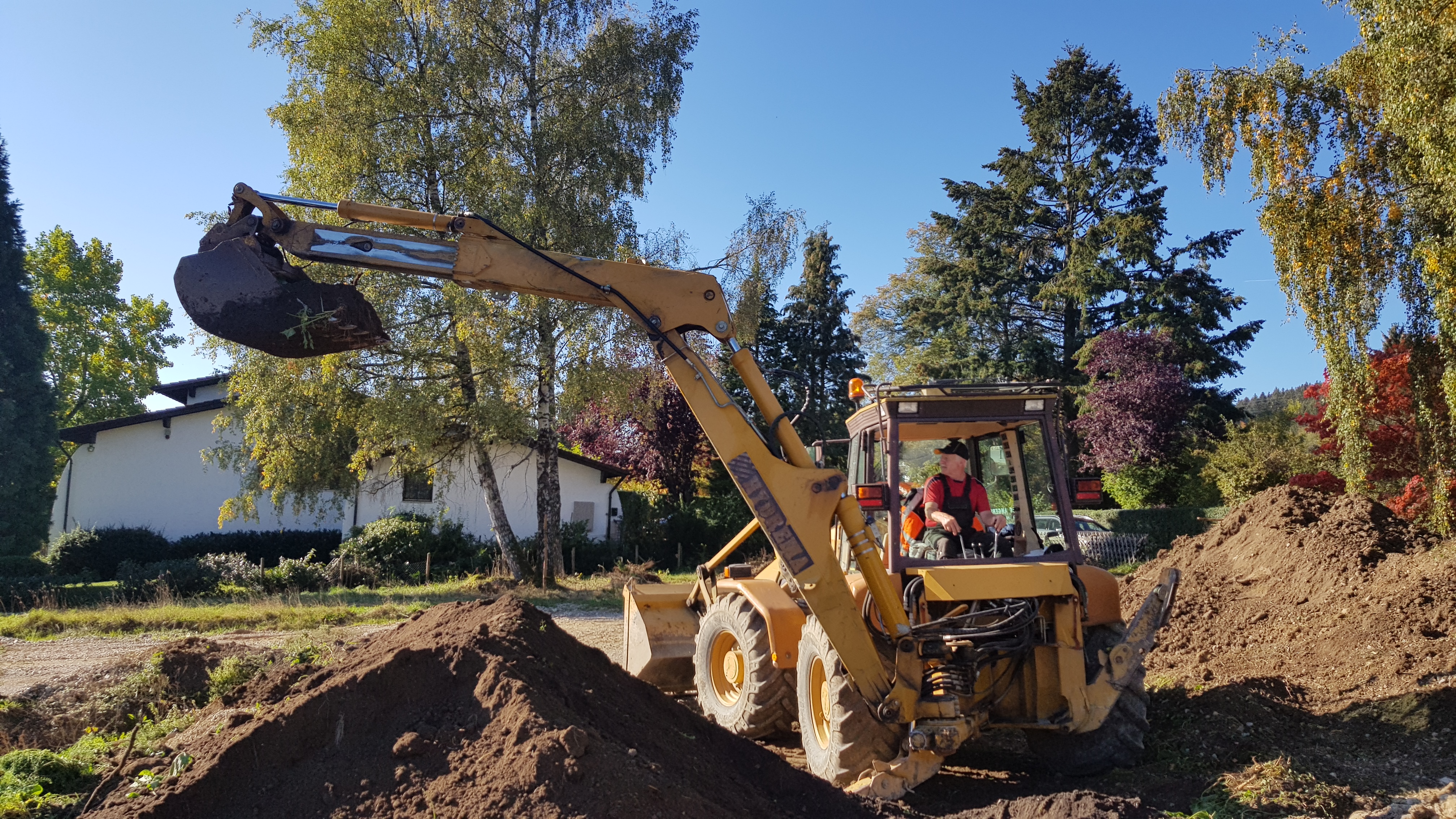 On this construction site, which is large, but also has its compact corners, you can only see this one machine thanks to the multifunctionality that is offered by the Hydrema. In addition, there repeatedly arise various jobs. Sometime you have to doze with great force and sometimes a ditch has to be set with the necessary precision, or even something has to be cleared out of the way. The operating range of the excavator arm on 280 ° turns the machine into a full-fledged 10 tonne excavator and at the same time thanks to the articulated steering system, it has an extremely powerful loader. With a high lifting force both at at the front and at the rear, you have a crane at the same time and, with the help of the pallet forks, you have a rough terrain forklift that can move materials on pallets. "That's why we always point out that it's a four-in-one machine," says Martin Werthenbach from Hydrema, who is very impressed with the connection between the operator and the machine. "In the state of the Hydrema you can see that the operator loves his machine very much." In fact, Angerer also does all the servicing on the machine himself; after all, he does have the appropriate experience and knowledge. ”And when you see Georg Angerer working with his Hydrema backhoe loader on the construction site, where he really gets to use all of the machines ability. You can really say that man and machine merge into one. "